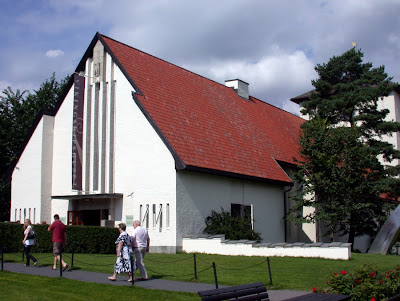 This is the Viking Ship Museum in Oslo. Quite a nice museum, situated in beautiful surroundings in Bygdøy. Some info:

The Viking Ship Museum displays the large Viking ships Oseberg, Gokstad and Tune, as well as founds from the chief grave at Borre in the Vestfold district. The three ships are the best preserved Viking ships known, found in royal burial mounds in the Oslo fjord. As burial ships, carrying the dead over to “the Other World”, the ships were equipped with unique treasures such as wagons, horses and especially textiles which are seldom preserved from the Viking age, now on exhibit at the museum.

Our knowledge of daily life in the Viking Age comes mainly from archaeological finds. The graves contained not only jewellery, weapons and vehicle tools, but also other tools and household goods. These finds are exhibited in the museum. 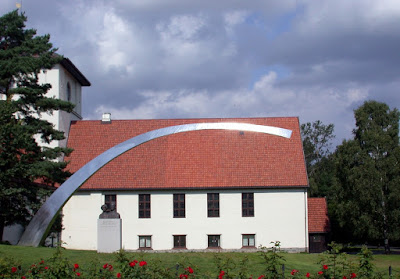 Oh. that's a really nice shot with the sculpture against the building.

Thanks Mike! Yes, I like this place. In today's post you can see the sculpture at close.