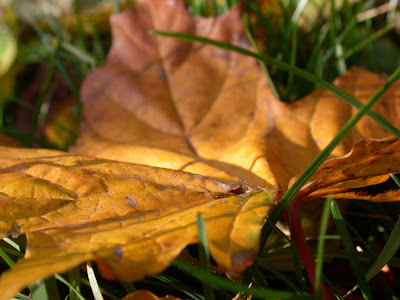 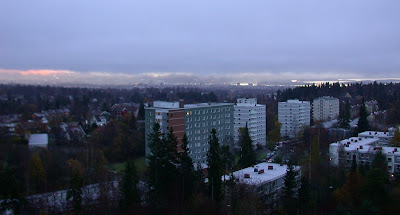 I guess it must have been pretty cold this night, as there was frost on the roof tops. This is the view from my apartment at approx. 7:30 this morning. Thanks to the end of daylight-saving time, we have brighter mornings than we had a few days ago.
Posted by Lothiane kl. 07:43 2 kommentarer: 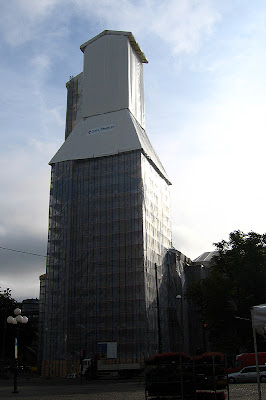 This is the view of Oslo Cathedral these days (actually its been like this all summer). The normal view you can see here.

Against the blue sky 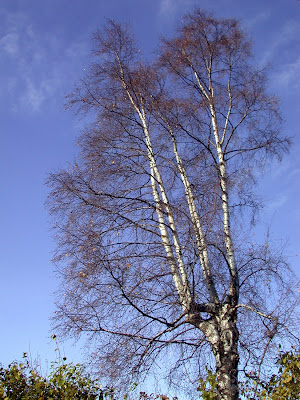 I'm sorry I haven't submitted any photos for the past few days, as I'm ill.

This is a photo from another sunny day, although we do have foggy weather today. 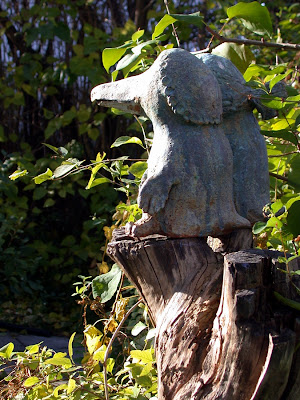 A friend of mine just mentioned something I've never thought of: Norwegians tend to always lift their face towards the sun. That's probably because we don't see it as much as we'd like.

These sculptured birds (by Finn Hald, a fantastic artist) look like they really enjoy the sunshine. Luckily, we still have nice, sunny days. :-)
Posted by Lothiane kl. 19:16 4 kommentarer: 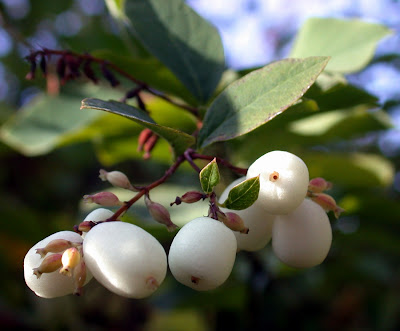 I have no idea what these are called, but they grow in many gardens on some kind of bush (or hedge). They are not something you can eat, but they're quite decorative.
Posted by Lothiane kl. 16:04 4 kommentarer: 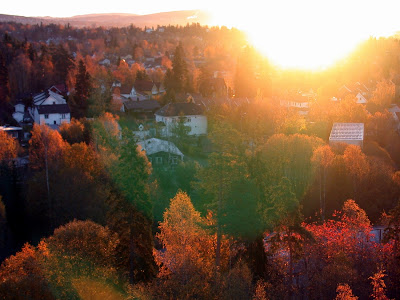 The autumn this year is really lovely, and this photo was taken the morning after the first night of frost. It was a crisp morning, but still very beautiful with the low sun and the coloured trees.
Posted by Lothiane kl. 20:56 6 kommentarer:

Evening field and a tag 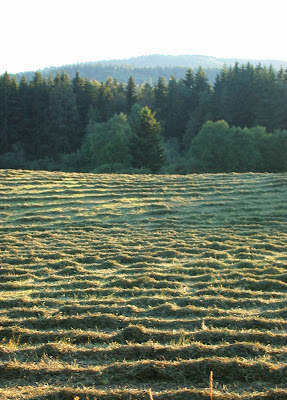 Nothing will grow here until next spring...

I have been tagged by Forks and the West End, Olympic Peninsula, Washington US and Norwich Daily Photo.

These are the rules:

4. Let them know they’ve been tagged by leaving them a comment on their blogs.

8 random facts about me:

1. I'm fascinated by people and people's nature.
2. I used to play the Great Highland Bagpipe, a very typical Norwegian instrument. Or not. :-)
3. I didn't drink coffee until I was 30, so I guess I didn't grow up until then. Actually, I didn't like beer until then either.
4. I love reading and have kept a record of almost every book I've read since 1984.
5. My great passions are music, photo and litterature.
6. Even though I have a chronic illness, I feel my life is much better now than it was 10 years ago.
7. I never cease to believe in true love.
8. I dream of travelling around Scotland with a brand new camera.

I am tagging these eight Daily Photo blogs: 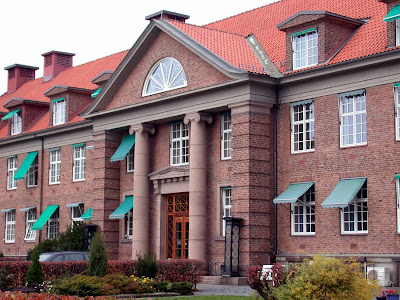 This is the psychiatric hospital at Vinderen in Oslo. The building is nice and the surrounding area is peaceful. I guess that's what they need, those who come here to get relief and help. 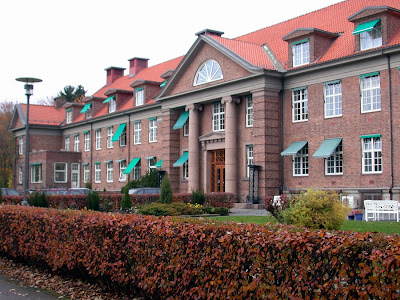 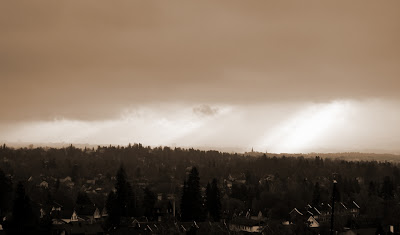 Just another morning view. I love how the sky changes everyday.
Posted by Lothiane kl. 21:25 1 kommentar: 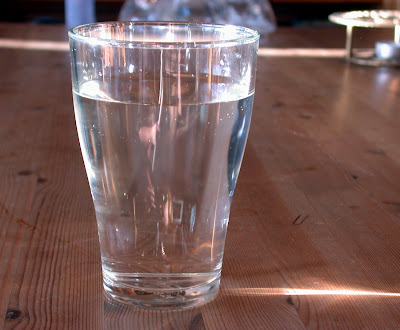 The people in Oslo woke up to the news today that there are parasites in our drinking water. All water should be set to boil for 3 minutes before use, before drinking it or preparing food and brushing teeth.
Usually Norwegians are very proud of the clean water we have here, but sometimes we hear differently. A while back there was a Giardia infection spreading in Bergen, where approx. 6000 people were ill. Some haven't recovered yet.
So far, noone in Oslo are ill due to the water, so hopefully the water isn't badly infected. Until further notice I'll boil all my water before use.
Posted by Lothiane kl. 09:24 6 kommentarer: 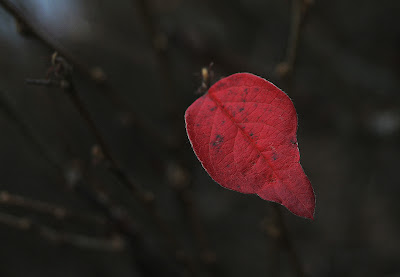 A single red leaf is all that is left... 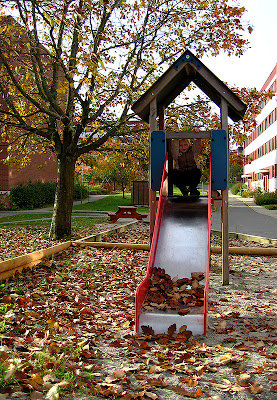 The playground is covered with fallen leafs after a windy night. 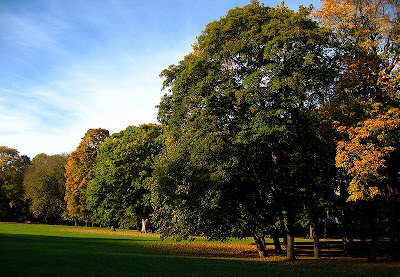 Another beautiful day this autumn....this is from the park surrounding the Royal Castle.
Photo: by Stormel
Posted by Stormel kl. 12:52 2 kommentarer: 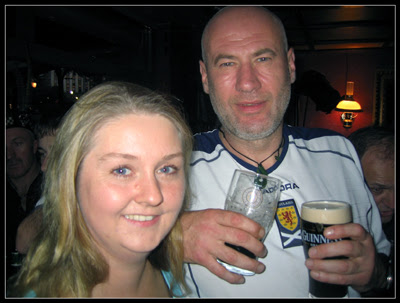 Tomorrow night, the Scottish singer Fish will be having a concert in Oslo at the Rockefeller music hall. I can't wait! I've been a fan of this artist since he was the lead singer of Marillion and have followed him during his solo career which so far has lasted for nearly 20 years so far. 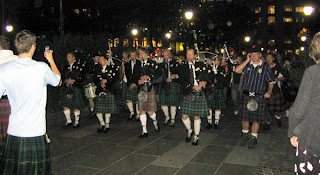 Before the concert there will be a party at a pub called Andy's in Oslo. The bagpipe band I used to play in will be there too. We'll all be parading to the music hall, and if we're lucky; Fish will join us! He did two years ago when the photo above was taken of myself and my hero.

I didn't take any of these photos myself, but I hope the photographer(s) will forgive me for posting them.

Almost all the tickets are sold for the concert tomorrow so this will be a great party!
Posted by Lothiane kl. 19:34 Ingen kommentarer: 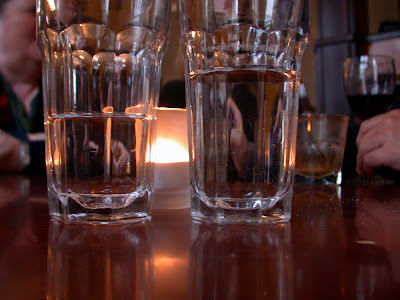 It's nice to meet up at a café and chat with friends and family.

This photo is from the same place as yesterday's post and is also taken by my son.
Posted by Lothiane kl. 08:26 Ingen kommentarer: 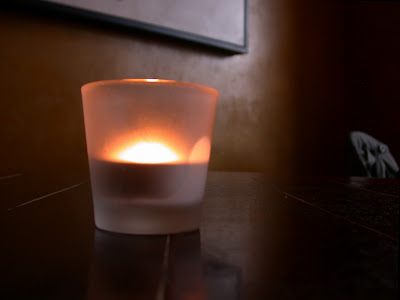 This photo was taken by my son (11 years old) while we were at a café called Tekehtopa with some family. I think it's a very nice photo with a good mood to it.

Tekehtopa is "apotheket" spelled backwards. It means "the pharmacy". They had to change the name at one time, because the organization for pharmacies didn't like them using this name for a café.

The building is from 1872 and for some years it actually was a pharmacy on the premises. It's a good place to meet friends while enjoying a cup of coffee or some nice food.
Posted by Lothiane kl. 12:50 2 kommentarer:

...and a beautiful night 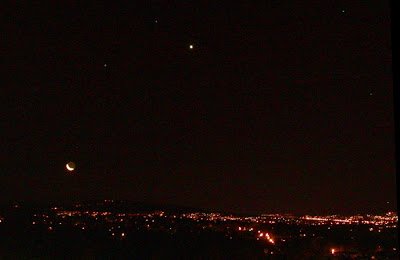 I woke up the other night and took this photo. The photo is nothing even close to the beautiful starry night I saw, unfortunately.
Posted by Lothiane kl. 08:28 1 kommentar: 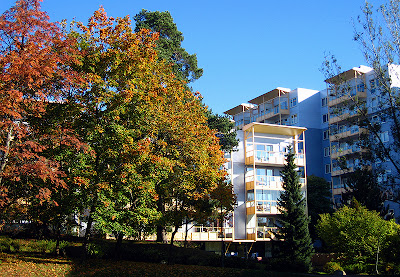 I went for a walk in the neighbourhood this morning, and did this shot. Its a really beautiful autumn day today.
Photo: by Stormel
Posted by Stormel kl. 13:39 4 kommentarer:

In the evening light 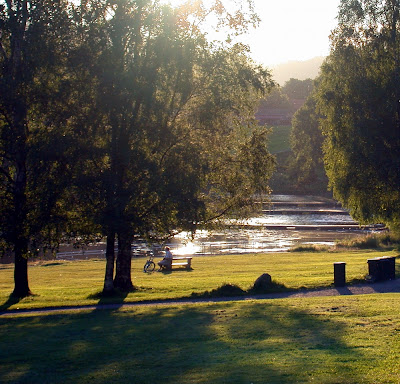 This photo was taken a few weeks back - along with several others, but I'd forgotten all about them. I've chosen a few I'd like to share with you.

This is from Bogstad, in the Sørkedalen valley. It's country side, but still inside the borders of Oslo.
Posted by Lothiane kl. 01:56 2 kommentarer: 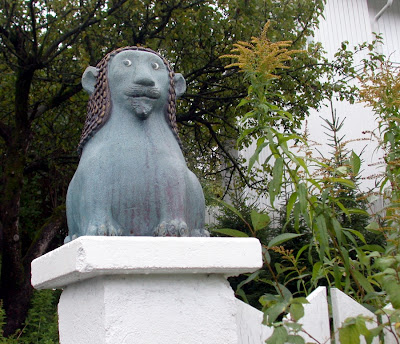 This is one of the charming and wonderful sculptures by Finn Hald. It guards the entrance to Galleri Borg, the gallery where most of Finn Hald's art is shown.
Posted by Lothiane kl. 18:28 4 kommentarer: 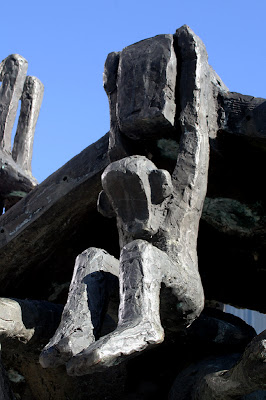 Detail of a sculpture near my block of flats.
Photo: by Stormel
Posted by Stormel kl. 20:44 1 kommentar: 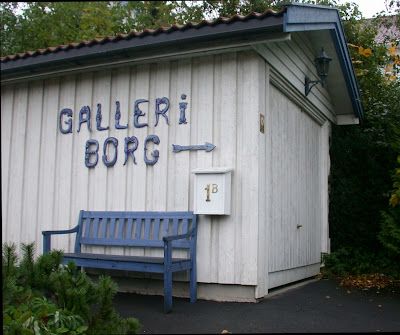 This is what you'll see first when you visit Galleri Borg (gallery Borg). The salamander letters are made by Finn Hald, a well-known sculptor who makes wonderful art. I love the salamander alphabet, the colour is great - especially with the bench underneath.

Galleri Borg is the gallery where we have a photo exhibition for the next three weeks.

The photo is taken by my 11 year old son.