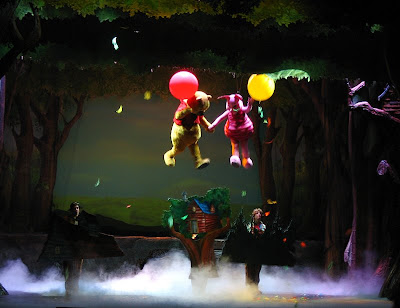 Saturday me and a little friend went to Oslo Spektrum to see a Winnie the Pooh-show. It was fun and we had a good time. :o) 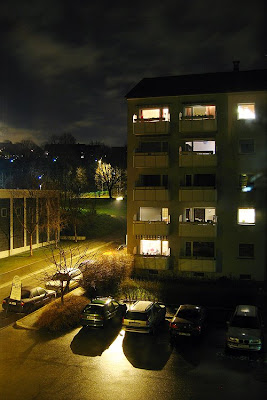 We have showed you this building from Ringgata before, but from another angle and in another light though. You can also see the back of the Munch-museum in this picture! It is the building on the left side. :o)
Photo: by Stormel
Posted by Stormel kl. 12:32 Ingen kommentarer: 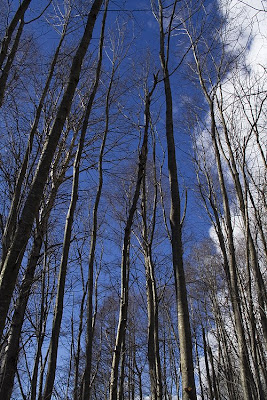 These trees are ready for spring! 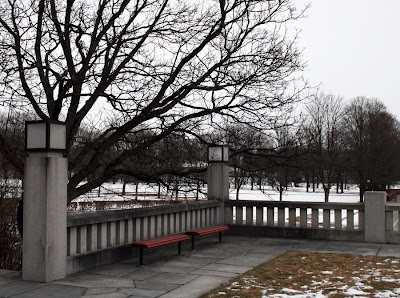 I found this calm spot in the Vigeland Park and liked it so much... with the red benches in an almost black 'n white environment.
Posted by Lothiane kl. 23:46 2 kommentarer: 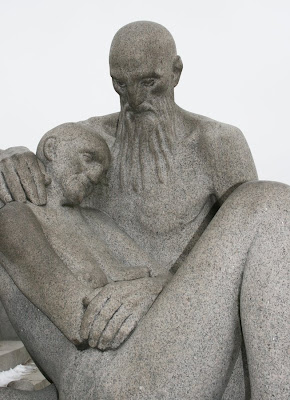 I found this couple very touching...

From the Vigeland Park in Oslo.
Posted by Lothiane kl. 11:11 3 kommentarer: 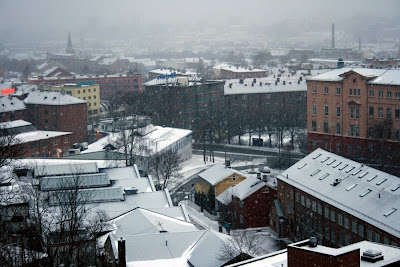 This winter we've hardly had any snow. When we finally thought that spring was almost here, all of a sudden we get cold weather and snow again. Not fun at all! This picture was taken yesterday at Carl Berner in Oslo. I had to drive very carefully when I went home, as it was quite slippery.

I've showed you this view before, when I told you about the yellow and the red wooden buildings that they are planning to demolish to build a shopping center and more parking space.
Posted by Lothiane kl. 21:26 12 kommentarer: 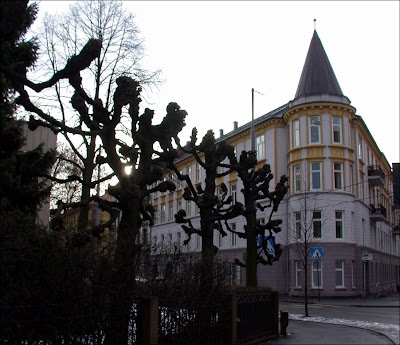 I like the many buildings in the Frogner area. Some of them have towers, like the one in this picture. I'm a bit romantic and wish I could live in a tower like that. :-)
Posted by Lothiane kl. 10:57 3 kommentarer:

26 November 1869 to 20 November 1938
Princess Maud of Wales, became Queen of Norway in 1905. Daughter of King Edward VII and Queen Alexandra of the United Kingdom. Married Prince Carl (later King Haakon VII) at Buckingham Palace in London on 22 July 1896.
Crowned in Nidaros Cathedral on 22 June 1906.
Only child: Olav V.
Buried in the Royal Mausoleum at Akershus Castle in Oslo.

This is the statue of the old king, Haakon VII. He was the grandfather of King Harald, who is the king of Norway now.

3 August 1872 to 21 September 1957
Son of Crown Prince Frederik and Crown Princess
Louise of Denmark. Elected to the Norwegian throne after
the dissolution of the union between Norway and Sweden in 1905. Crowned in Nidaros Cathedral on 22 June 1906.
Only child: Olav V. Buried in the Royal Mausoleum
at Akershus Castle in Oslo.

Thank you, Randi Gording for another of your wonderful photos!
Posted by Lothiane kl. 21:41 1 kommentar: 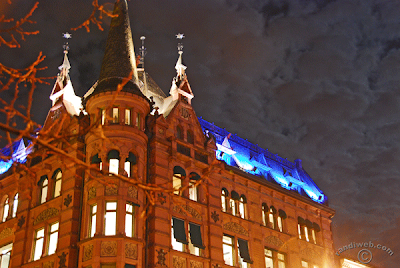 Another of Randi's wonderful Oslo by night-photos. She wrote that this reminded her of the school in Harry Potter. The roof is lit up like that, but why blue..? I don't know. Still, it looks nice!

This picture is one of many wonderful photos by Randi Gording at Randiweb.com. She is so kind that she has given me permission to show some of them to you on Oslo daily photo. More will follow. Thank you, Randi! :-)
Posted by Lothiane kl. 12:26 7 kommentarer: 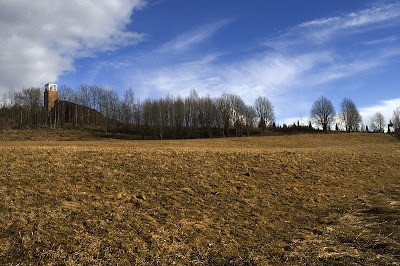 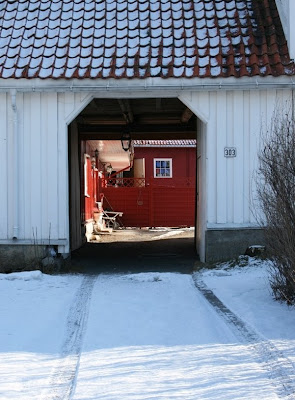 I thought this entry/gateway was so symbolic for this time of the year. Winter outside and spring closeby. :-) 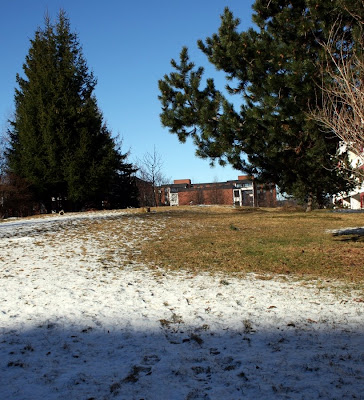 It's melting... soon, very soon this lawn will be all green and beautiful. I can't wait!
Posted by Lothiane kl. 14:36 3 kommentarer: 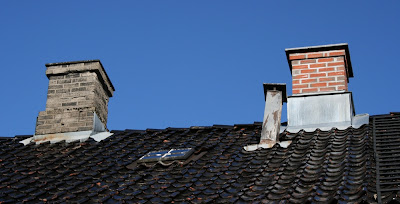 Some Norwegian chimneys for you. Are they similar to the chimneys where you live? When I went to Scotland last year, I noticed how they looked so different from the ones we have here. I've never really thought much about chimneys before. ;-)
Posted by Lothiane kl. 21:37 2 kommentarer: 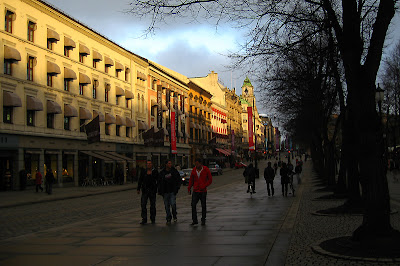 What on earth are they doing? 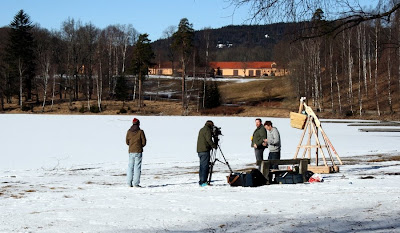 I went on a little trip to Bogstad today, to try my new camera. It was a beautiful day, although quite cold. All of a sudden we've got winter again, but the sun does a great job of melting it. :-)

By the Bogstad lake, these men were filming. And what on earth is that thing behind them? It seems to be a katapult, but I have no idea why they had placed it here and what they were filming for. 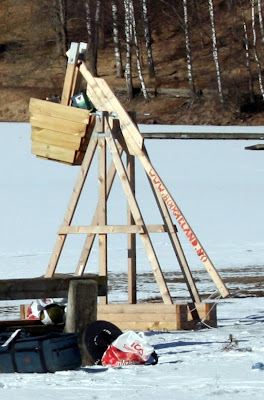 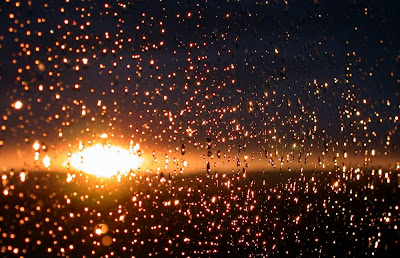 A rainy afternoon in Oslo, but then all of a sudden, the sun shines again. 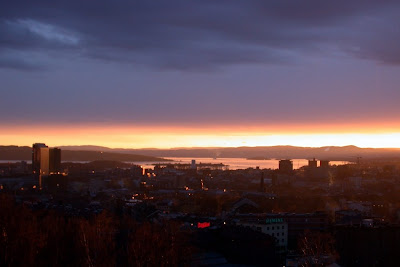 A view of Oslo towards the fjord. The spring is getting closer 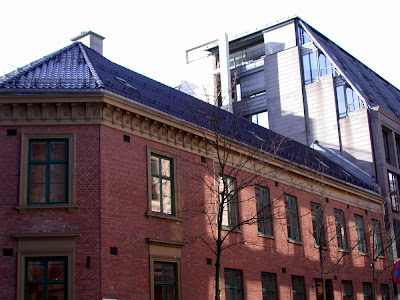 Some buildings near Dronningensgate (Queen's street) in the center of Oslo.
Posted by Lothiane kl. 12:52 Ingen kommentarer:

At the Norwegian Film Institute "Filmens hus" - The Norwegian film institute is in the center of Oslo. There is a film club there, where you can watch older movies and movies not normally shown at the ordinary cinemas. I was a member of that club when I was much younger, and I remember I watched several films by the Marx Brothers. Quite fun. :-)

In the building there is a museum, showing the history of Norwegian film making. Among other themes, you can see how Ivo Caprino made the dolls used in movies like "Flåklypa Grand Prix" (released under the English title "Pinchcliffe Grand Prix"). The dolls in the photo above is from one of the many films Caprino made based on Norwegian fairytales. 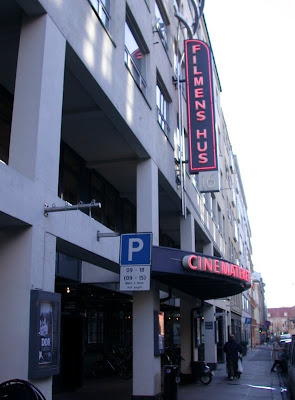