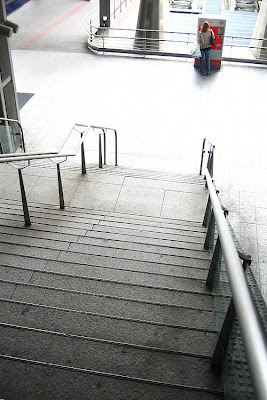 A woman buys a ticket for a train at Oslo S (Oslo Central Station). 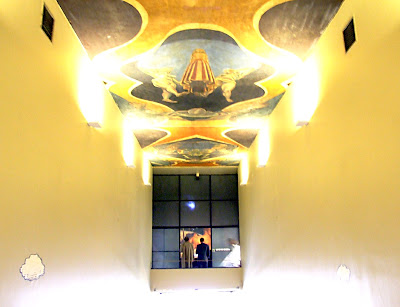 This is a detail from inside the art gallery 'Kunstnernes Hus' which I've showed you earlier. The balcony is just a corridor from one art room to another. The people are looking into a smaller room where a film is being showed. I like how the walls and ceiling are painted. :) 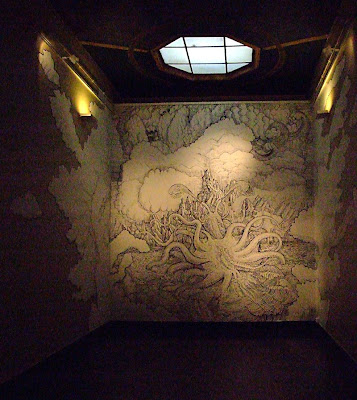 The art gallery 'Kunstnernes Hus' may seem like a boring building outside, but inside are hidden treasures. I loved this sight when I walked up the stairs to the second floor.

A car of shoes 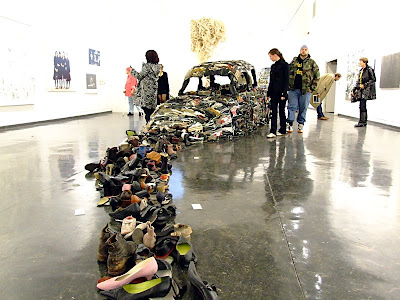 Juan Andres Milanes (Cuba): The Route.
Another picture from the The National Annual Autumn Exhibition at Kunstnernes Hus. 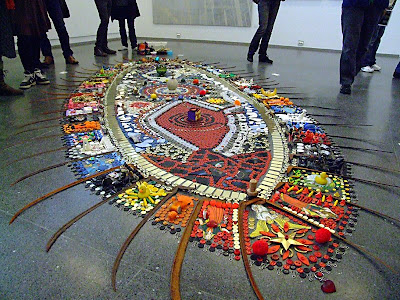 Mona Nordaas: Transformation Games.
Yesterday I showed you a picture of the art gallery 'Kunstnernes Hus' and told you about The National Annual Autumn Exhibition, or 'Høstutstillingen' as it's called in Norwegian. I usually visit every year, since it's interesting to see what they show there. This is from my visit last week. I'll show you some more in the days to come. :-) 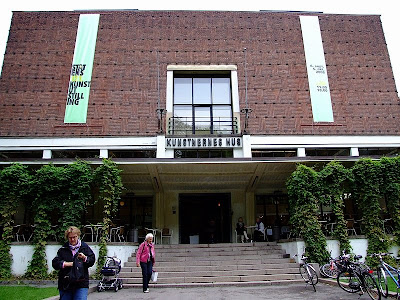 This building, Kunstnernes hus (The Artists' House), is an art gallery close to the Royal Palace. Every autumn there is an exhibition called The National Annual Autumn Exhibition, or 'Høstutstillingen' as it's called in Norwegian.

Høstutstillingen is a celebration of contemporary art and first started out as a radical protest against "the established bourgeoisie" that dominated the art environment in Oslo in the late 1800's. Since then they have had annual exhibitions, except for the years 1941-1944 due to WWII.

It's enough to make you climb the walls 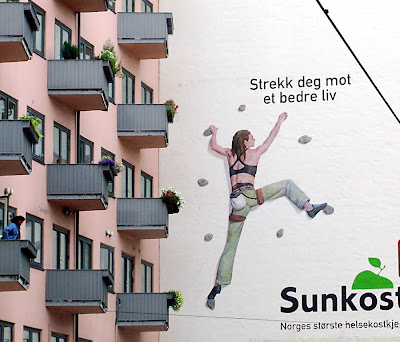 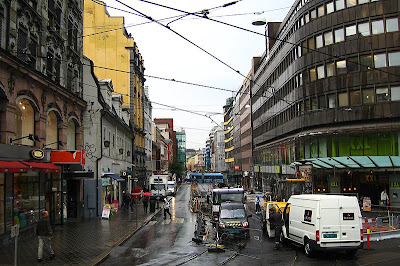 This street is called Storgata.
Photo by: Stormel
Posted by Stormel kl. 18:12 1 kommentar: 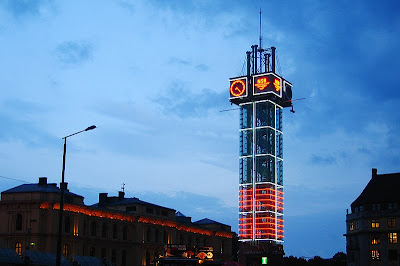 This tower outside the central station is called Trafikanten. At Trafikanten you can get info and timetables for all the buslines, trams, trains, boats and metro in Oslo, and the surrounding areas.
They also have a website.
Photo by: Stormel
Posted by Stormel kl. 20:02 3 kommentarer: 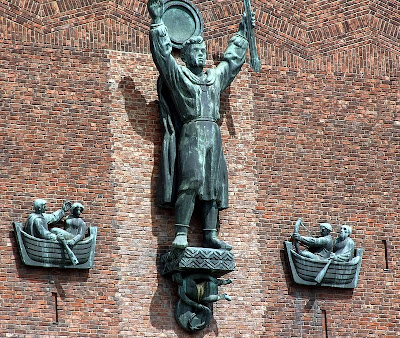 This is the decoration on the Oslo City Hall, facing the seaside. It was made by Nic Schiøll, a Norwegian sculptor. The big statue is of Saint Hallvard, the patron of Oslo. We have told you about him before, when we showed you one of the manholes of Oslo.

The story of Saint Hallvard: On May 15 in the year 1043, a woman was accused of stealing, but claimed she was innoncent. She tried to escape and begged a young man, Hallvard, to take her on his boat across the sea. He believed her and helped her, but the followers soon reached them on another boat and accused Hallvard of helping a thief. He wouldn't listen to them, so they shot him with arrows and then beat the woman to death. To cover up the murders, the woman was buried near the beach and Hallvard was dumped in the sea with a millstone around his neck. But his body floated, even with the heavy millstone, and Hallvard was found.

Later, at his grave, several omens were reported. Hallvard was martyrized as he had died trying to save an innoncent woman, and was eventually named a saint. His remains were later placed in a silver shrine and placed in the Maria church in Oslo.

In the year 1130, the new Saint Hallvard church was built and the holy shrine was moved there.

Saint Hallvards feastday is May 15, marked by concerts and walks through medieval Oslo.