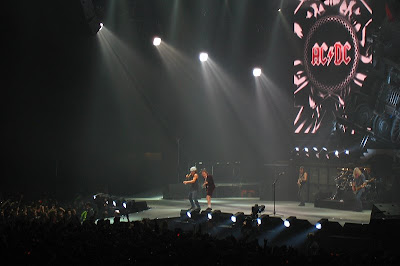 Telenor Arena is a new multi-use indoor stadium being constructed at Fornebu in the municipality of Bærum, Norway, just outside Oslo. It will be used for football matches and will be the new home ground of the football club Stabæk, but also for conserts and other events. The stadium is scheduled to open ahead of the 2009 season in Norwegian football.

The Australian hard rock band AC/DC performed at the arena on 18 February. This concert was the first of the European Leg of their Black Ice World Tour.
Photo by: Stormel
Posted by Stormel kl. 10:01

AC/DC is really neat and I like your photo of them.

this is a great photo. I like AC/DC. I hope you take a nice break and keep it up when you can. thanks

I am afraid I don't know AC/DC (by the way I know the difference between AC and DC if it may help). Seriously, this is more neat and clear photo I ever seen taken in a concert.