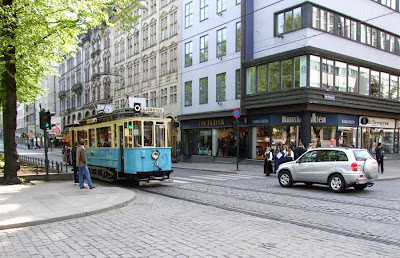 This is not a common sight in Oslo. It's the first and only time I've seen one of these really old trams. You may remember the photos of one of the more modern trams (called "trikk" in Norwegian) that we've showed you earlier. These are a common sight in the center of Oslo, but this old one was probably only used for a short time. It would be really cool to be able to ride it!
I don't know how old this tram is, but I'll try to find out.
Edit: I've already got help from a friend, who sent me this link (only Norwegian). It says that this is a veteran tram called "70". It was built in Hamburg, Germany, and was delivered in 1913. It was in use until 1968, and was restored for the 100th anniversary of running electrical trams in 1994.
The tram can be rented for parties, making of movies, weddings etc. There is room for 52 passengers in the first motor car and 52 passengers in the towed vehicle.
What a great idea for a special party!
Photos by: Lothiane 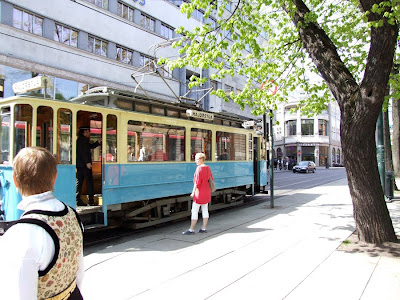 Wonderful pictures! Reminds me of my childhood. Thanks alot for posting them.

the doll and the wheel sa...

Great work! Keep it UP!

A curious piece of machinery! It is almost a millenia old, and yet it still moves. Thank you for sharing those nice photos with us. :)

Thank you for your comments! :)