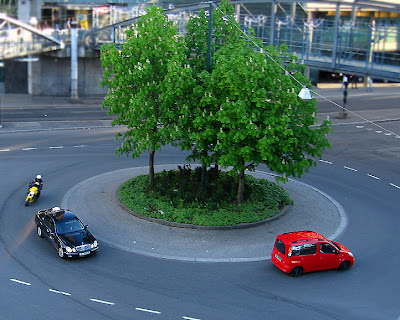 This photo is really cool, I think. And I can say that, because it's not mine. This is my dear guest blogger Stormel's photo. I'm really happy she can help me with photos because I can't easily get around as much.

This is a roundabout situated near the railway station in Oslo. The bridges above the roundabout can take you from the railway station to the shopping mall "Oslo City". Close by is also the "Oslo Spektrum Arena" where they have concerts, shows and trade fairs. This is also the arena for such events as the Nobel Concert, Nordic Music Awards, the Spellemannsprisen (the Norwegian "Grammy"), and a variety of top international artists. Hopefully, I can show you a photo of Oslo Spektrum later.
Posted by Lothiane kl. 13:00

I am sorry to hear about your illness. I hope, the situation is now better.
Your friend`s photo is really good one :)

Have a nice new week!

Greetings from Richmond upon Thames

Dear Lothiane, I'm so sorry to read about your illness. I hope you will get better and better.

I agree the photo is cool. We have many roundabout here too :)

Not many roundabouts around here, but the ones I have been around were confusing. Neat photo.

This looks like a model with litte toy cars!

I also thought they were toy cars at first! I love the bright colors!

The Salems: He he, that would probably help. ;)

Tanty: Thank you as well - I hope I'll get better too, but I've been like this for years, so I guess I can't expect miracles. I'm happy you like the photo!

Tara: Thank you for commenting! :)