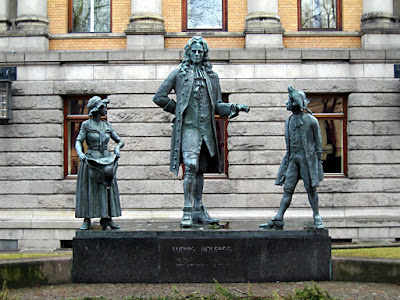 Statue of Ludvig Holberg outside of the National theater in Oslo.

Ludvig Holberg, Baron of Holberg (December 3, 1684 – January 28, 1754) was a writer born in Bergen, Norway during the time of the Dano-Norwegian double monarchy, and spent most of his adult life in Denmark. He was influenced by the Humanism, the Enlightenment and the Baroque. Holberg is considered the founder of modern Danish and Norwegian literature,[1][2] and is best known for the comedies he wrote 1722–23.

So many books, so little time to read! Most of the authors we get are American or Brit. Very few others, even if translated in English, reach Manila.

That is sad that you don't get access to all books. :(

Thanks for visiting, Hilda! :)

that is one natty looking dude!