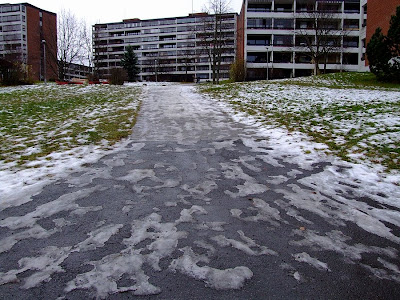 A lot of people have a romantic view of what winter is like. This is mostly people who don't have snow where they live, and have probably never experienced winters at all. At least not the winters we usually have in Oslo.

It snows and it looks really nice for a short while. Then it starts melting and we get some kind of grey "soup" that we call "slaps". Slaps is horrible, really, but it gets even worse. After some days of melting and a lot of slaps, it may get colder again. In fact it gets so cold that the "slaps" freeze and the ground turn icy. This makes it very interesting to go out for a walk, sometimes you even end up in the hospital.

In this photo you get a good look at what the frozen "slaps" looks like. ;)

Ooooh, I can just feel myself about to slip on this. Painful.

Thank you for reminding me why I should be happy not to see snow but about once every few years!

This is why I never understood why someone Norwegian would want to write a novel called 'Snart Er Det Host' 'Soon It Will Be Autumn'.

Rambling Round: Haha, yes be happy! ;) There are actually people who love winter... But I don't.

Lindab: Haha, I don't know that novel. I don't think it's something for me. ;) Although I love autumn... but not winter.