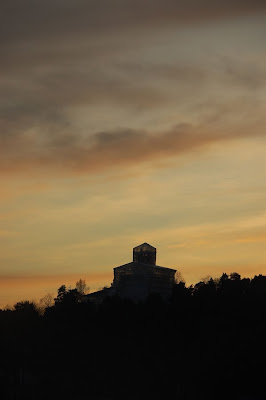 Oscarshall is situated at Bygdøy in Oslo. It was built in 1852 for King Oscar I, and then sold to the Norwegian state in 1863. It has been at the disposal for Norwegian kings ever since.

The architectural style is patterned on the English neo-Gothic castle, which was typical in Scandinavia in the mid-19th century. In addition to the main building, the property consists of a park that stretches down to the fjord, where an open pavilion is located.

After being restored in the 1990s, the castle opened to the public as a museum.

Thank you so much, Anne-Sophie for letting us use your photo. Please visit at Ordinary Oslo.
Posted by Lothiane kl. 08:17

would love to see it close up

Beautiful Oslosky, thanks for sharing.
... and if you like to visit my blog you can find some painted norwegian skies.
Ha en fin helg
Hartmut